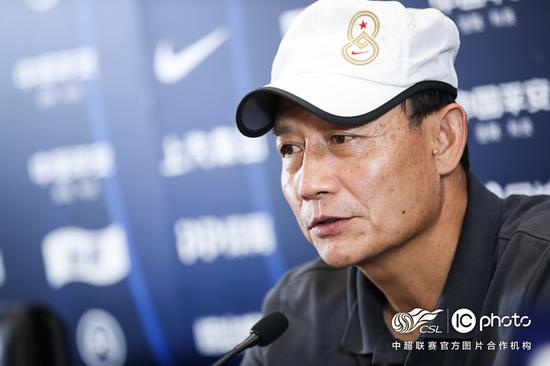 On the afternoon of September 28, Beijing time, in the 14th round of the 2020 China Ping An Super League Group B, Tianjin TEDA drew 0-0 with Wuhan Zall. After the game, TEDA coach Wang Baoshan and Zall leader Pang Li attended the press conference to review the team's performance in this game.

Ended the last game in the Suzhou Division. Since the last 3 games are more intensive than before, our players have suffered a lot of injuries, including suspended players. We are forced to choose some young players with little game time experience to play. , Judging from their performance in the game, the defense did a good job and the offense also had a very good opportunity, but the result of the game was rather regrettable. We still have to give these young players who have few games affirmed for their performance.

Achimpen has never scored. He is very eager to score. We also hope that he can break the scoring shortage in the game. He still created some opportunities in today's game, but it is a pity to miss a penalty.

I received the team halfway through, and it was a very fast process to understand the players, but in this process, more explanations were on the tactical board, and the training time was very limited. In the intensive schedule, we can only explain more through the tactical board. Although our points are ranked last, we have a lot to summarize, but there are also many gains.

We have lost the possibility of entering the top 4, the future relegation battle will be more intense, and the next challenge for us. After we took over the team, we found that the team’s physical fitness was very problematic, and such results were a big blow to self-confidence, but physical fitness has gradually improved recently. In addition to this stage of the game, players have suffered more injuries. , Many players are in rotation, and the prospect for the second stage is that all players can participate in training. In the second stage, our personnel will become more and more tidy. I hope we can play our mental outlook and tactical play in the second stage of the game, and improve our self-confidence. To